“Digit Tutor” — a simple online game for kids in Svelte, which uses speech recognition engine to train pronounciation of digits: from “0” to “9”.

The project is open-source, so, feel free to send a PR, if you wish!

This post is part of a series about building Digit Tutor, that include:

If you’re interested in details on how “Digit Tutor” started and was built in Svelte, please, refer to the first article in the series.

This article covers the details of speech recognition — how it works, which browsers support it and how I have used it.

Speech recognition in the app is based on SpeechAPI. It is not really supported in many browsers, as of now: https://caniuse.com/speech-recognition. Here is a screenshot of that page at the time of writing this text: 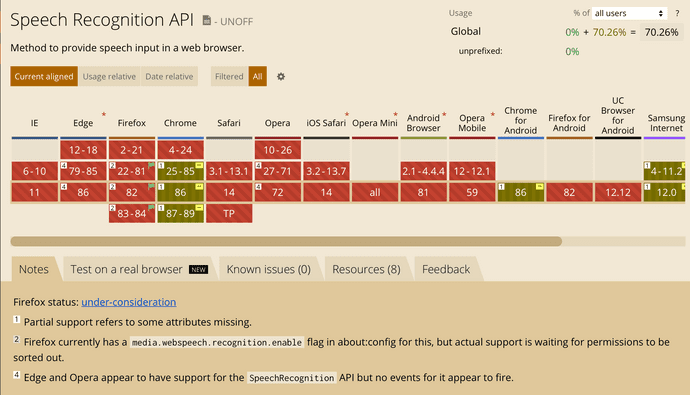 As you see, the support matrix can be quickly described as “chrome-only”, however, Firefox can also support it with some config. Other browsers either don’t support it at all, or have required objects in window, which do nothing.

So, it is definitely not ready for cross-browser production usage, but fits for experiments, like our game.

As you might guess, speech recognition in browsers contains of three parts:

Logically, there might also be something like “intent recognition”, to understand what the user really means, but it seems that current technology state does not allow to do that reliably.

At first, and very logically, I thought I would need to support Grammar and Recognition in my game. Later, during the testing stages, I’ve figured out, that grammar part is not used at all, so I could only focus on recognition.

A Word on Chrome Implementation

It turned out, that Chrome has very peculiar speech recognition implementation:

Keep a note on these details, in case you care about privacy and Grammar support.

Show Me the Code!

The first thing to do is to get & check if Speech objects are in the window. I am using a very simple approach here, with only one idea of having it all as a separate module. Actual file is here:

Here we are initializing everything we need (even grammar):

Note, that for grammar initialization I am using a separate module called “locale”, since grammar depends on current language. Later, I understood, that grammar isn’t actually used.

Before jumping to configuration details, I’ll describe how to use that recognition instance:

Now, as we have properly initialized all required objects, we need to:

The instance usage is simple: call .start() to start listening, and subscribe to .onresult event to handle results.

There are also things like .onerror and .onnomatch events: I am using them just to show those errors to user, haven’t seen them actually fire, yet.

Let’s dive into .onresult implementation; below is its annotated version:

Can you spot a bug in the code above? If you need to say “six”, and you say “twenty six”, this will still count as correct. Not a big deal, I think.

As you see, this code works with Svelte and UI, but it isn’t impacted in almost any way by Svelte. The cool thing is in this line transcript.indexOf($l.numbers[digit]) >= 0. $l here is a Svelte store, and it will always refer to the current locale, so it will look for correct words as digits.

The last piece of code related to recognition is in onCorrectDigit handler. It calls .abort() and .start() once again, to clear the results array and make sure the app memory footprint is consistently low. I think, it would work even without that restarting, but this feels correct.

That’s all! We’ve covered 100% of lines, related to speech recognition in the app. As you see, there’s nothing complex and hard work is abstracted away by the browser. The only piece not covered is handling missing SpeechAPI; this is fairly straightforward, so omitted here.

If I was implementing it, probably, I would go with a simpler arguments for .onresult event, but it takes just 2 more minutes, to figure out its structure and, probably, covers more cases, than mine.

Also note once again, that this all is almost Chrome-only for now, so cannot consider it “production-ready”.

In the third Digit-Tutor article I will cover localization implementation: Svelte has a built-in approach, however, I’ve opted for a custom, store- based implementation, since I had to integrate that with speech recognition, too. What I got, I called a “poor man’s localization for Svelte” as it felt simpler and more flexible than the built in one in the end.

Blog by Rustem Mustafin, PM at Akvelon, who sometimes even pretends to code! About me.